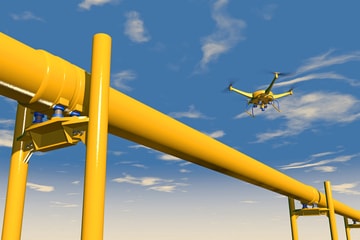 Our society depends on the safe and efficient movement of energy and raw materials, without which, our daily routines would stop. These energy supplies need to be transported from fields to different locations throughout the country with a cost-efficient and secure system to cover large distances. While gas is primarily transported by pipelines on land and by ships on water, oil is transported through trucks, trains, ships, and pipelines. Overall, pipelines provide an alternative transport system that is less polluting and more economical compared to conventional vehicles. The main idea is to transport fluids through fixed structures that do not require, as in the case of oil tankers or trucks, gasoline or fuel to operate. Pipelines are the most efficient systems for the transportation of oil and natural gas. It is a massive works of engineering that has to face and overcome complex construction problems first, and a high level of maintenance in the long term. Technology helps to increase and maximize safety. The current US pipe network, formed by 2.6 million miles of oil and gas pipelines, constitutes a real circulatory system (the largest in the world) that supplies energy to our civilization.

The Technical Standards and Safety Authority (TSSA) inspects and audits pipelines in North America. Inspectors examine pipelines prior to start-up and then periodically while in operation to ensure compliance with existing safety standards. TSSA also surveys quality programs for pipelines to ensure they meet a variety of codes or standards.

TSSA is authorized by the Ontario government to regulate the safe transportation, distribution, storage, handling and use of hydrocarbon fuels, such as natural gas, under the provincial Technical Standards & Safety Act.

Pipelines construction follows strict regulations and material tests are conducted before they are deemed fit to be placed into service. There are two main procedures to test the integrity and reliability of pipelines: destructive testing and non-destructive testing. The destructive testing procedure uses hydrostatic pressure to evaluate if the pipeline meets the safety standard for operation. The pressure method is based on the use of a series of pressure taps that pressurize water. The taps are placed at a predetermined distance along the pipe segments in order to monitor the trend of the pressure. Electronic equipment sends signals to the control panel and constantly checks the pipeline parameters. If a leak occurs there will be a deviation from the expected pressure, or a catastrophic failure will result in a dramatic loss of pressure. During this test, a “spike” test is usually employed which subjects a pipeline to pressures well beyond intended maximum operational pressure. This method has to be used before placing a pipeline into service, although subsequent interval testing may also be required. Concerns raised with this traditional testing method include the possibility that the testing itself weakens the line and makes it possibly more prone to failure later in the pipeline life cycle.

The non-destructive testing, primarily through the use of in-line inspection (ILI) tools can be generally categorized into magnetic flux leakage method and ultrasonic wave technique. It uses “sophisticated and sensitive” tools called “smart pigs” that “travel through the pipe and measure and record irregularities that may represent corrosion, cracks, laminations, deformations”. The leakage monitoring made by ultrasonic detectors calculates the impact that a moving fluid has on a sound wave. The limits of such technique are again the unlikelihood to detect small leaks. A Magnetic Flux Leakage (MFL) tool involves the use of magnets along the pipeline. These will create a magnetic field with a homogeneous flux through the pipeline. “Anomalies result in a change in distribution of the magnetic flux, which, in a magnetically saturated pipe wall, leaks out of the pipe wall.”

Lines that are “non-piggable” are tested with a direct assessment (DA) technique that measures external corrosion, internal corrosion, and stress corrosion. DA is a controlled approach that does not prevent the pipeline to operate, and literally involves excavating the areas around the pipeline in order to afford personnel direct access for testing and examination. Non-piggable refers to lines that are either too small in diameter for an ILI tool to pass, or lines which were placed into service before the use of such tools were mandated. In this latter case, valves or angular changes to the direction of the line have are not conducive for the passage of ILI devices.

Traditional monitoring techniques include both land-based patrols through the pipeline right-of-way or aerial inspections by helicopter or plane. Aircraft can be utilized to visually examine large areas in a relatively short period of time. Additionally, aircraft can be outfitted with leak detection instrumentation. These sensors can detect methane or hydrocarbon in the air, indicating the presence of a leak in the corresponding pipe’s segment (identified through the aid of GPS). Overall, aerial inspections use non-contact or standoff detectors, where both the operators and equipment remain distanced from the sample. Standoff detection is almost always accomplished with methods involving spectroscopic techniques such as laser-induced fluorescence or infrared.

High-altitude over flight allows to analyze a larger area but, at the same time, it results in a reduction of resolution. Helicopters can fly low altitudes and collect more precise data but they are more expensive to operate and they require more fuel for short distances. The oldest method is the visual inspection carried out by foot patrols. They are usually operator contractors that monitor predefined areas to detect leaks. The main limitation is that this visual/olfactory inspection may not be able to detect small leaks or internal problems. These inspections are performed according to a predetermined pattern and are mainly based on statistical analysis of segments that have a higher probability of leaks; consequently, there are areas that are never inspected.

To conclude, there is not an optimum solution or a perfect inspection technique. The choice is based on a case evaluation, and every advantage or disadvantage is calculated taking into account several factors such as the price of operation, cost of equipment, time flexibility, and regulation requirements.

Another technique that can bring considerable benefits, both in terms of viability and speed of operations, is the use of drones to monitor pipelines. Drones are used in the most diverse places on the planet and for countless purposes. In particular, drones are used by the military for image collection and real-time information. Drones are aircraft piloted by some operators placed at a considerable distance from the vehicle which generally operate at low altitudes. Operationally this technology may not possess the necessary instrumentation needed to effectively identify potential defects, but drones clearly offer enhanced surveillance when it comes to unauthorized activities on a pipeline right-of-way or larger spills which are more easily noticed by aerial observation.

One main advantage is the possibility of incorporating reliable and sensitive sensors to a small mass that can keep high endurance and safety, avoiding catastrophic impacts or flight accidents. Pipelines extend for several miles and they cross different type of lands, from rural areas to high mountains. The use of drones will overcome any visual or spatial limitation. Drones can collect and transmit images directly to a station, where a technician will interpret the data.

Overall, the important aspects to consider when choosing a detection instrument or inspection method are:

Currently, engineers are trying to develop technologies that will increase benefits and reduce high costs. Drones can be the first step toward an automatized inspection phase, but the equipment is not enough advanced to assure detection and constant inspection at the same time. Furthermore, the Federal Aviation Administration (FAA) is still unsure on how to manage drones’ legislation both in terms of flying zones and privacy. Cameras and sensors that are constantly flying and collecting data/images can interfere with the privacy of citizens living in the surrounding areas.