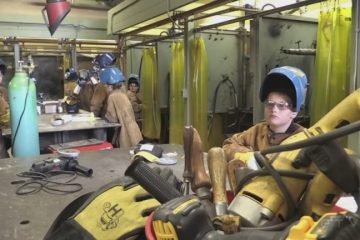 Sparking Interest in Next Generation of Welders

Industry analysts continue to predict a coming shortage in the skilled trades and there are ongoing efforts to try to recruit new people into the field.

At Northern College in Timmins on Tuesday, over a dozen young people tried their hands at welding for the first time. With a crack, a pop and the sear of melting metal, several students met a professional welder for the first time. Some say it was a little intimidating, sometimes frustrating, but hands-on learning is never easy.

Ashton Noel is a student that took part in the workshop.
“The metal is a like a conductor, so every time it would hit the other metal, it kept sparking, and I’m like, ‘what is it doing?’ And then I tried getting it off, and it would be pretty difficult, but hey, it’s my first time so it’s obviously going to happen.” said Noel.

He and a dozen other students are taking a crash course in the age old trade at Northern College and for some it could be the start of continuing a family tradition.

Avery Dicks is another student in the course.
“My pop did that for a career, so I kind of want to follow his footsteps.” said Dicks.
Even with the trade in the family, stick welding for the first time can be an eye opening experience.
“It’s pretty interesting. Some people might think it’s a little scary, but it’s actually not that bad.” said Dicks.

While the students may not be welding professionally for several more years, the college hopes a little exposure can go a long way.

Aaron Klooster is the Associate Dean, Trades and Technology at Northern College.
“The youth really are the future of this trade. And getting them hooked now, and I say that, and I mean that, getting them hooked, because it does hook you. It’s a fun activity, getting them hooked now is the way they’re going to secure that future for themselves.” said Klooster.
The college says a future in welding is a bright one because jobs are plentiful, the pay is good, and at the moment, companies can’t fill the jobs.

Tyy Dearden is a welding professor.
“It’s in high demand. There’s a shortage right across Canada, so we’re hoping, out of this group, maybe five to six.” said Dearden.The professor also says by the end of the week, the students should have a good idea of what life as a welder has to offer, fingers crossed that he may have inspired a new generation to carry the welding torch forward.