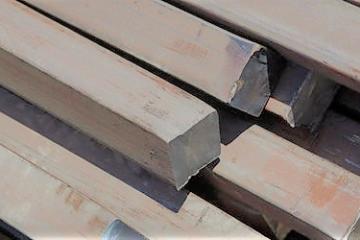 Upon heating above Ac1the microstructure starts to transform to a face-centered cubic phase, austenite. Austenite is the parent of the microstructures in low carbon steels that result from austenite decomposition upon cooling and provides the framework for some of their characteristics. Shape and size of the austenite grains will determine the rates of transformation in terms of nucleation and growth. The austenitic microstructure evolves in a way to reduce its grain boundary area thereby decreasing its total energy; so larger grains will grow at the expense of smaller ones. 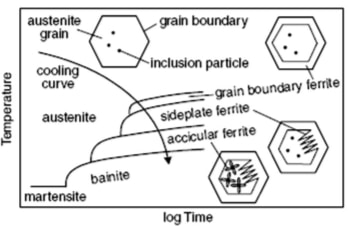 At sufficiently slow cooling rates below the Ae3temperature, austenite transforms to ferrite. Austenite decomposition to ferrite consists of two stages of nucleation and growth.

Ferrite nucleation usually occurs at austenite grain boundaries where different nucleation sites, e.g. grain corners, edges, faces, etc. are available. If ferrite nuclei are assumed to have a shape of spherical caps, then the activation energy for nucleation at grain corners is most favored, followed by grain edges and grain faces while homogeneous nucleation requires the highest activation energy and is, therefore, the least favored way for nucleation(Johnson 1975). In an investigation by Enomoto et al.(Enomoto 1986)nucleation rates at grain faces were compared to nucleation rates at grain edges. They concluded that at small undercooling grain edge nucleation is dominant over grain face nucleation while at larger undercooling the grain face nucleation is dominant. Sectioning experiments by Huang and Hillert(Huang 1996)showed that the dominance of grain corners as nucleation sites is so strong that it may be suggested that the nucleation at grain edges have occurred at special positions which are energetically similar to the grain corners. These experiments also prove that the number of active nucleation sites is very low, for instance, ferrite nuclei occupy only about 5-7% of all grain corners. Regardless of the site, there are always Kurdjumov–Sachs (KS) and/or Nishiyama–Wassermann (NW) orientation relationships between ferrite nuclei and the parent austenite phase(Ray 1994, Adachi 2005). When ferrite nucleates at sites along prior austenite grain boundaries (PAGBs), the activation energy for nucleation is minimized by having an orientation relationship either with both or with one of the two austenite grains and get randomly orientated with respect to the other austenite grain. Experimental studies show that generally, about 90% of ferrite grains have a close orientation relationship with one or both of the neighboring austenite grains(Landheer 2009a). These orientation relationships define the shape and interfaces of the ferrite nuclei, however, there is no conclusive model in the literature that can describe them. A first description is a spherical-cap model with incoherent austenite/austenite grain boundaries and incoherent austenite/ferrite phase boundaries. Experimental results reveal that this model under-predicts the experimental results of the rate of nucleation(Lange 1988). A more advanced model, i.e. the disk-shaped pillbox model, describes nuclei with partially or fully coherent interfaces. This model yields a lower interface-energy configuration and thereby can match the experimentally observed nucleation rates. However, this model fails to explain the temperature dependence of the nucleation rate that was observed by in-situ synchrotron measurements(Offerman 2002).

After nucleation at PAGB, polygonal ferrite usually grows isotropically within each neighboring parent austenite grain, however, between two austenite grains, it selectively grows most rapidly into one of the austenite grains depending on the orientation relationship (Figure‎0‑2). 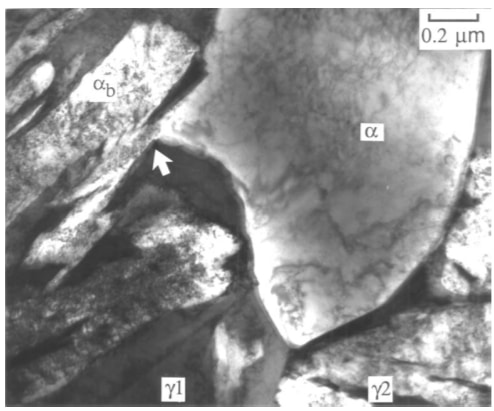 For larger undercooling, in grades with sufficient carbon content, there is an increasing tendency for the ferrite to grow as Widmanstätten plates, another potential product of austenite decomposition. Nucleation of Widmanstätten ferrite usually occurs at the prior austenite grain boundaries and its growth often has a steady-state plate-like fashion especially in the later stages of transformation(Yamanaka 2007). Widmanstätten plates consist of coherent broadsides with low interfacial energy and mobility and incoherent tips with a much higher interfacial energy and mobility (Figure‎0‑3). Widmanstätten ferrite can be considered as the intermediate phase between polygonal ferrite and bainite.

a b
Figure‎0‑3- Colony of Widmanstätten plates a- 2D Phase field simulation b- Experimental observation (Loginova 2004b).

Bainite is another decomposition product that may form when austenite is cooled past a critical temperature. The temperature range for transformation to bainite is between those of ferrite and martensite.

Bainite grows in the form of sheaves. A sheaf of bainite has a complex morphology consisting of many subunits (Figure‎0‑4), within each sheaf the subunits are parallel and of identical crystallographic orientation and habit plane(Bhadeshia 2001). Bainite can be commonly classified into upper and lower bainite(Mehl 1938)(Figure‎0‑5). These two variants have similar lath substructures(Honeycombe 1980)but they are different in terms of carbide distribution. At higher temperatures, upper bainite forms whereupon formation of ferrite lath the excess carbon in supersaturated ferrite is partitioned into the residual austenite such that carbide precipitates between the laths (Bhadeshia 1990). The ferrite laths grow into the austenite in a similar way to Widmanstätten side-plates. On the other hand at low temperatures lower bainite forms where upon formation of ferrite plates carbon cannot partition rapidly therefore carbide dispersion is finer and aligned at approximately the same angle to the plane of the ferrite plate (Bhadeshia 1983, Sandvik 1982, Porter 2009). 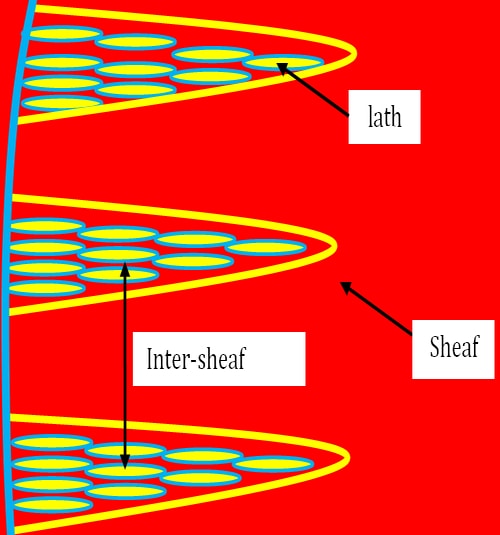 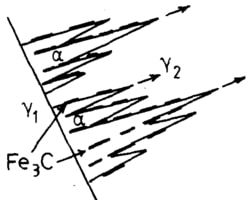 Nucleation sites at PAGBs have the lowest activation energies i.e. highest nucleation temperature, therefore there is a preference that the first set of bainite nuclei form at these sites(Yamamoto 1995)acquiring as close as possible orientation relationships with respect to both sides of the PAGB. However the orientation relationship with respect to the austenite matrix never exactly coincide with the exact KS. Angular deviations of close packed planes between bainite and austenite increase with increasing transformation temperature, while variations in angular deviations for close packed direction with temperature are small(Takayama 2012). As shown inTable‎0‑1, twenty-four different bainitic ferrite orientations (variants) can be formed within a single austenite grain in the KS orientation relationship(Takayama 2012). However, the orientation deviations of bainite with respect to one of the adjacent austenite grains is much more than the other one. Therefore, bainite sheaf does not grow into the austenite grain with higher orientation deviation(Spanos 1996, Furuhara 2008). Furthermore, bainite sheaves stop growing when they impinge with a hard obstacle such as a grain boundary or another plate. 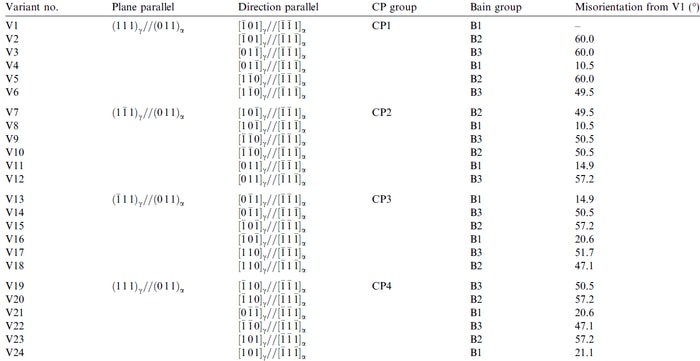 The second step (Type II) involves the nucleation of bainite on ferrite formed along PAGBs(Aaronson 1956). Early experimental investigations based on low magnification optical microscopy (<2000X) observations did not capture this type of nucleation(Zackay 1962), instead they suggested secondary bainitic ferrite was a product of instabilities at the growing ferrite/austenite boundaries of ferrite allotriomorphs in a manner similar to instability-driven dendrite formation during solidification. This was also supported by early modeling work by Townsend and Kirkaldy(Townsend 1968)who adapted the Mullins-Sekerka theory of morphological instability in solidification(Mullins 1963)to the solid-solid case. Nevertheless, later investigations using higher magnification microscopy proved that the type II nucleation is responsible for the formation of bainitic ferrite on allotriomorphs. Spanos et al.(Spanos 1996)demonstrated that bainitic ferrite and the allotriomorphs from which they evolve are not single crystals but are instead composed of multiple crystals formed by individual nucleation events. Even some early low magnification optical microscopy observations(Aaronson 1956)confirm that there is a clear interface between the bainitic ferrite and the allotriomorphic ferrite, suggesting that type II nucleation was responsible for their formation. Type II nucleation is also supported by numerical calculations(Aaronson 1995)showing that at the growing ferrite/austenite interface there is sufficient driving force available at the terraces of ledges to permit nucleation of bainitic ferrite. Bainite nuclei can only form on regions of the austenite/ ferrite interface where the orientation lies within the so called Bain region which encompasses the KS and NW relationships(Bhadeshia 2001)(Figure‎0‑2). The experimental study of Guo et al. shows that in the austenite grain which has a very close KS relationship with the ferrite, bainitic plates select the same variant as the ferrite and because bainite plates form a low energy interface with the ferrite, bainite nucleates faster and covers the entire surface of the ferrite whereas in the austenite grain which had an orientation several degrees deviated from the KS relationship, nucleation of bainite is slower and bainite choose the variants that have a small misorientation angle with the ferrite (Guo 2012).

Although there is a consensus on the diffusional nucleation mechanism of bainite, the underlying growth mechanism is controversially debated i.e. in general, two competing hypothesizes are discussed: military, displacive(Bhadeshia 1979), or civilian, diffusional ledge-wise growth(Reynolds 1991). In military transformations, many atoms homogeneously move and the chemical composition is maintained whereas in civilian transformations atoms do not move homogenously leading to a c chemical composition change.

Diffusional theory describes both nucleation and growth of bainitic ferrite via a reconstructive mechanism. In this approach, the growth of bainite is described by the propagation of a series of steps on the growing interface, ledges, whilst carbide is assumed to form and grow simultaneously with the growth of ferrite ledges. Diffusional theory has been supported by several experimental observations, including:

Displacive theory considers a diffusion-less transformation description via the autocatalytic nucleation and growth of successive subunits. In this approach, it is assumed that a subunit of bainitic ferrite nucleates with carbon partitioning into parent austenite but grows displacively until growth is ceased by plastic relaxation in the adjacent austenite. Carbon is then rejected from the supersaturated ferrite by diffusion and carbide starts to form. In this theory, growth continues by the nucleation and growth of new subunits on the tips of old subunits. According to this theory, the extent of the bainitic transformation of carbide free bainite formation is limited by the T0 curve resulting in incomplete transformation. Displacive theory has been supported by several experimental observations, including:

At very high cooling rates austenite transforms to martensite. Martensite has a body-centered tetragonal (BCT) crystal structure and is formed by a displacive mechanism, which involves the cooperative movement of atoms. As a result of the accumulation of elastic strain, martensite formation is always incomplete accompanied by a fraction of retained austenite. In addition, prior to reaching the martensite start temperature austenite may get enriched by carbon that has been rejected by the partitioning during ferrite and bainite formation. Prior carbon enrichment makes austenite more stable, pushing the martensite finish temperature to lower temperatures, therefore austenite may not completely transform to martensite upon cooling. Thus the martensitic transformation is always a partial transformation forming martensite/austenite island constituents (MA)(Wang, 1992, Davis 1993). MA microstructural constituents usually appear in four different morphologies including blocky particles/ islands, connected particles at PAGBs, elongated stringer particles along bainite subunits and MA-C constituents consisting of MA and carbides(Li 2010).