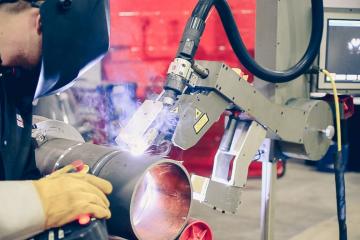 By Kathy Kerr, Special to The Globe and Mail

Novarc Technology’s next generation of robots can take workers out of harm’s way and help to address a looming global shortage of experienceg d welders. Vancouver-based robot company Novarc Technologies Inc. is creatinsome heat and light of its own in the pipe-welding industry.

“Pipe welders have to go through more than 10 years of work experience and training to do this kind of job. With that comes a cost. But the biggest problem we’re trying to solve is there’s not enough of these welders currently in the marketplace,” Mr. Karimzadeh says.

“The American Welding Society projects there’s going to be a shortage of 400,000 welders by 2025 and that story reverberates everywhere across the globe.”

Novarc robots are not designed to replace workers. They work in pairs – operator and robot – with the operator setting and supervising the robot as it tackles the manual weld part of the job. The machines can be used in sectors including the oil and gas, shipbuilding, chemical and nuclear industries, Mr. Karimzadeh says.

“With technology such as adaptive robots and collaborative robots, junior welders can basically do as much as two to three highly skilled welders an hour,” Mr. Karimzadeh says. “The robot works as a productivity tool to enhance the capabilities of existing welders and operators with very little training. That’s different than traditional robots where you replace workers.” 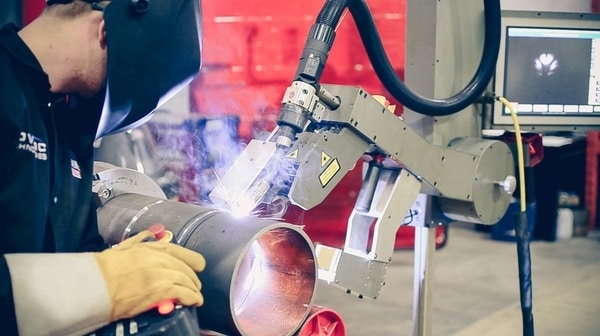 Figure 1. Humans work in concert with Novarc robots – with the operator setting and supervising the robot as it tackles the manual weld part of the job. ‘The robot works as a productivity tool to enhance the capabilities of existing welders and operators with very little training.’ (Novarc)

Traditional autonomous robots, like those used in the automotive industry for years, are designed for “high-volume, low-mix” tasks, repeating the same task over and over with no change. The new generation of co-bots specialize in low-volume, high-mix work, where each task may vary somewhat from the task before it.

Novarc, which has 16 full-time employees, brought its robots to the market in 2016. Mr. Karimzadeh says the firm is finishing its sixth and seventh units.

The cost of a Novarc Spool Welding robot varies, but starts at about US$250,000. The company states that payback on that investment “is usually one to two years and could be as little as six months,” thanks to increased productivity and lower labour cost. The company’s first customer was Canmet Materials in Ontario, a research laboratory within Natural Resources Canada.

Canmet provided Novarc with a testimonial: “Novarc’s SWR (spool welding robot) system met all of our requirements, and their team was extremely helpful in providing the support we required during the testing and evaluation period executed through our Build in Canada Innovation Program (BCIP). We also found Novarc’s collaborative robot to be extremely intuitive to operate and the entire project was a great success.”

Novarc has been shopping the robot around to trade shows in North America in the past year. “We launched in Chicago and we’ve had very good traction in the U.S. and with companies in the U.S.,” Mr. Karimzadeh says.

The business has been slow to attract attention, however, in Alberta, a natural market for pipe-welding applications.

“We would want to help pipe manufacturers [in Alberta] to become more competitive. Alberta is a little bit behind the ball on this, but this could change quickly,” Mr. Karimzadeh says.

Investment in Novarc has come from Canadian government and private sources, he says. “We’ve been fortunate the Canadian government has been supporting our efforts in helping us develop this product through different programs and we appreciate that. … We’ve had angel investors and strategic investors and the founders themselves have been able to fund the company to this point.”.

Novarc landed $1-million in seed funding from Seaspan shipyards with participation from BDC Capital in March of 2017. Seaspan’s investment, in turn, hinges on its commitment to the federal government’s shipbuilding strategy.

“As part of our commitment to the Government of Canada under the national shipbuilding strategy, we are intent on identifying partners that can help regrow the industry here,” says Tim Page, vice-president of government relations for Seaspan.

“Novarc is one of those parties that we find has a very interesting technology that we believe can be useful to our business downstream at a minimum, and more generally applied to the AI and robotics community. They came to us with an idea that we thought worthy to invest in and we’re delighted to have done so.”

Figure 2. Novarc is now doing research and development on a machine learning and intelligent robot project. ‘Our vision is to launch a more autonomous version of the robot that can basically use the learning it has had in the past about what a good weld and bad weld is and use that learning in future welds,’ Soroush Karimzadeh, CEO of the Vancouver-based robot company, says. (Novarc)

That said, Seaspan has no commitment to continue a commercial relationship with Novarc. “We’ve invested in them as part of our investment to Canada without any precondition of a downstream relationship, but that’s not to suggest we’re not interested …” Mr. Page says.
The Seaspan Vancouver Dry Dock did use Seaspan robots in the installation of a new ballast water treatment system on a cable-laying vessel in the spring.

Jason MacFarlane, head of the advanced manufacturing cluster at the MaRS Discovery District, a global innovation hub in Toronto, says Novarc’s experience of a mix of government and private funding is fairly typical in advanced manufacturing technology firms in Canada.
Canada needs to adopt these types of technologies more quickly, he says.

“I would love to see our home-grown technologies adopted widely in Canada. Hopefully it’s a matter of time till they [Canadian pipe fabricators] see the payback and the real applications of using Novarc’s technology and they will adopt it,” Mr. MacFarlane says.

“In general, Canada has been slow to adopt advanced technologies in manufacturing. That’s one of the biggest reasons and drivers behind the creation of the Advanced Manufacturing Supercluster. We recognize as a whole we need to do a lot better job of embracing technology to be more competitive.”

Novarc’s spool welding robots are a niche application, he admits. But the coming shortage of skilled welders makes them a compelling technology. And Mr. MacFarlane says he isn’t concerned about the potential of lost jobs in the trades.

The collaborative robot also takes workers out of the way of harmful work environments as well, he adds. The spool welding robot for instance, allows the human operator to stay at a greater distance from the arc and heat of the weld.

“Removing humans from dangerous situations is probably a fantastic driver behind autonomous robotics. You see high interest in it for it in the mining industry.”

Novarc is now doing research and development on a machine learning and intelligent robot project.

“Our vision is to launch a more autonomous version of the robot that can basically use the learning it has had in the past about what a good weld and bad weld is and use that learning in future welds,” Mr. Karimzadeh says.

Novarc’s robots record each of their welds now, creating the data set needed for the next generation of robots.

“With this information we can launch a product that’s going to be an updated version of the existing collaborative robot, but it’s going to be more autonomous. There will be less supervision required by the operators.”