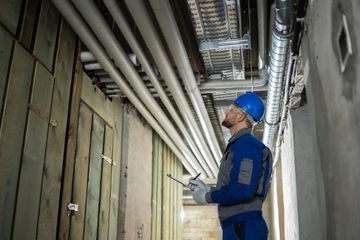 Based on API Code, the definition of pipe is a pressure-tight cylinder used to convey a fluid or to transmit a fluid pressure. If you look to the refinery or chemical plant, you can see the jungle of pipes which are connecting the vessels together. Statistic shows that 40 % of total mechanical failures in the units are because of the process piping.

This article provides you information about site inspection of process piping as well as important points on in-service inspection in process plants.

What is the Process Piping Inspection Requirements at the Construction Site?

The process piping design and construction is not under the ASME Code scheme of stamped items. It means there is not certification for construction contractors by ASME, and it is the responsibility of owner to select a qualified and experienced contractor for its process piping construction project. This is the reason that in the ASME B31.3 code you cannot see the wording of “Authorized Inspector,” and instead the words “owner inspector” has been used.
The owner inspector can be the owner’s own qualified inspector or the inspector of a third party inspection company under contract with the owner. Throughout the ASME Construction codes, when you see the words “authorized inspector,” you notice there is an ASME Stamp scheme there.

Contrary to the ASME B31.3, the ASME B31.1 code for power piping (boiler external piping) has the ASME stamp scheme. The construction contractor must be certified by the ASME organization and must hold the “PP” stamp. So the wording for inspector in the ASME B31.1 is “authorized inspector,” which means that this person has specific qualifications and a commission card from NBIC.

For more details, review the Pressure Vessel Certification article. The certification process for the power piping contractor is similar to the pressure vessel. Here at Acetake Group Inc. we help industries with their inspections and test plans and we make sure all the required standards are met.

What is In-Service Inspection Requirement for Process Piping?

The In-Service Inspection code for your process piping is API STD 570. The title of the code is Piping Inspection Code: In-service Inspection, Rating, Repair, and Alteration of Piping Systems. The other API recommendation practices and codes are also necessary to be used in conjunction with this Code.

Some of these Recommend Practices are:

ASME construction and referenced code sections also might be used such as ASME B31.3 and ASME Code Section IX. For repair, the requirement of API STD 570, or ASME PCC-2 need to be met. The API 570 Piping Inspectors are qualified persons to do the piping system inspection.

What are the Important Items in the Piping Inspection?

You may use the following content as a summary of points for the in-service inspection of the piping system: