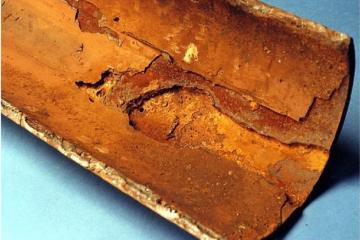 When corrosion products are not deposited on the steel surface, very high corrosion rates of several millimeters per year can occur. This “worst case” corrosion is the easiest type to study and reproduce in the laboratory. When CO2 dominates the corrosively, the corrosion rate can be reduced substantially under conditions where iron carbonate can precipitate on the steel surface and form a dense and protective corrosion product film. This occurs more easily at high temperatures or high pH values in the water phase. When H2S is present in addition to CO2, iron sulfide films are formed rather than iron carbonate, and protective films can be formed at lower temperature, since iron sulfide precipitates much easier than iron carbonate. Localized corrosion with very high corrosion rates can occur when the corrosion product film does not give sufficient protection, and this is the most feared type of corrosion attack in oil and gas pipelines.

CO2 is composed of one atom of carbon with two atoms of oxygen. It is a corrosive compound found in natural gas, crude oil, and condensate and produced water. It is one of the most common environments in the oil field industry where corrosion occurs. CO2 corrosion is enhanced in the presence of both oxygen and organic acids, which can act to dissolve iron carbonate scale and prevent further scaling.

Carbon dioxide is a weak acidic gas and becomes corrosive when dissolved in water. However, CO2 must hydrate to carbonic acid H2CO3, which is a relatively slow process, before it becomes acidic. Carbonic acid causes a reduction in the pH of water and results in corrosion when it comes in contact with steel. Areas where CO2 corrosion is most common include flowing wells, gas condensate wells, areas where water condenses, tanks filled with CO2, saturated produced water, and pipelines, which are generally corroded at a slower rate because of lower temperatures and pressures. CO2 corrosion is enhanced in the presence of both oxygen and organic acids, which can act to dissolve iron carbonate scale and prevent further scaling. The maximum concentration of dissolved CO2 in water is 800 ppm.

When CO2 is present, the most common forms of corrosion include uniform corrosion, pitting corrosion, wormhole attack, galvanic ringworm corrosion, heat-affected corrosion, mesa attack, raindrop corrosion, erosion corrosion, and corrosion fatigue. The presence of carbon dioxide usually means no H2 embrittlement. CO2 corrosion rates are greater than the effect of carbonic acid alone. Corrosion rates in a CO2 system can reach very high levels (thousands of mils per year), but it can be effectively inhibited. Velocity effects are very important in the CO2 system; turbulence is often a critical factor in pushing a sweet system into a corrosive regime. This is because it either prevents formation or removes a protective iron carbonate (siderite) scale. CO2 corrosion products include iron carbonate (siderite, FeCO3), iron oxide, and magnetite. Corrosion product colors may be green, tan, or brown to black. This can be protective under certain conditions. Scale itself can be soluble. Conditions favoring the formation of a protective scale are elevated temperatures, increased pH as occurs in bicarbonate-bearing waters, and lack of turbulence, so that the scale film is left in place.

CO2 corrosion of carbon steel used in oil production and transportation, when liquid water is present, is influenced by a large number of parameters, some of which are listed below:

The detailed influence of these parameters is still poorly understood and some of them are closely linked to each other. A small change in one of them may influence the corrosion rate considerably. Various prediction models have been developed and are used by different companies. Among them are the deWaard et al. model (Shell), CORMED (Elf Aquitaine), LIPUCOR (Total), and a new electrochemically based model developed at IFE. Due to the complexity of the various corrosion controlling mechanisms involved and a built-in conservatism, the corrosion models often overpredict the corrosion rate of carbon steel. The Shell model for CO2 corrosion ismost commonly used in the oil/gas industry. The model is mainly based on the deWaard equation published in 1991.

Starting from a “worst case” corrosion rate prediction, the model applies correction factors to quantify the influence of environmental parameters and corrosion product scale formed under various conditions. However, the first version of the model was published in 1975, and it has been revised several times, in order to make it less conservative by including new knowledge and information.

The original formula of de Waard and Milliams implied certain assumptions that necessitated the application of correction factors for the influence of environmental parameters and for the corrosion product scale formed under various conditions. CO2 corrosion rates in pipelines made of carbon steel may be evaluated using industry accepted equations that preferably combine contributions from flow-independent kinetics of the corrosion reaction at the metal surface, with the contribution from the flow-dependent mass transfer of dissolved CO2.

The corrosion rate calculated from the original formula with its correction factors is independent of the liquid velocity. To account for the effect of flow, a new model was proposed that takes the effect of mass transport and fluid velocity into account by means of a so-called resistance model: where Vcr is the corrosion rate in mm/year, Vr is the flow-independent contribution, denoted as the reaction rate, and Vm is the flow-dependent contribution, denoted as the mass transfer rate. In multiphase turbulent pipeline flow, Vm depends on the velocity and the thickness of the liquid film, whereas Vr depends on the temperature, CO2 pressure, and pH.

The corrosion caused by the presence of CO2 represents the greatest risk to the integrity of carbon steel equipment in a production environment and is more common than damage related to fatigue, erosion, or stress corrosion cracking. NORSOK, Shell, and other companies and organizations have developed models to predict the corrosion degradation.

NORSOK’s standard M-506 can be used to calculate the CO2 corrosion rate, which is an empirical model for carbon steel in water containing CO2 at different temperatures, pH, CO2 fugacity and wall shear stress. The NORSOK model covers only the corrosion rate calculation where CO2 is the corrosive agent. It does not include additional effects of other constituents, which may influence the corrosivity (e.g. H2S), which commonly appears in the production flowlines. If such a constituent is present, the effect must be evaluated separately. None of the de Waard models includes the H2S effect.

H2S at levels below the NACE criteria for sulfide stress corrosion cracking (per the MR0175 NACE publication reduces general metal loss rates but can promote pitting. The pitting proceeds at a rate determined by the CO2 partial pressure; therefore, CO2-based models are still applicable at low levels of H2S. Where the H2S concentration is greater than or equal to the CO2 value, or greater than 1 mol%, the corrosion mechanism may not be controlled by CO2 and, therefore, CO2-based models may not be applicable.

The impingement of sand particles can destroy the inhibitor film and, therefore, reduce inhibitor efficiency. Inhibitors also perform poorly in lowvelocity lines particularly if the fluids contain solids such as wax, scale, or sand. Under such circumstances, deposits inevitably form at the 6 o’clock position, preventing the inhibitor from reaching the metal surface. Flow velocities below approximately 1.0 m/s should be avoided if inhibitors are expected to provide satisfactory protection; this will be critical in lines containing solids.

Glycol (or methanol) is often used as a hydrate preventer on a recycled basis. If glycol is used without the addition of a corrosion inhibitor, there will be some benefit from the glycol. De Waard has produced a glycol correction factor. However, if glycol and inhibitor are both used, little additional benefit will be realized from the glycol and it should be ignored for design purpose. Methanol is batch injected during start-up until flowline temperatures rise above the hydrate formation region and during extended shutdown.

Single-phase flow refers to a flow with only one component, normally oil, gas, or water, through a porous media. Fluid flow influences corrosion by affecting mass transfer and by mechanical removal of solid corrosion products. The flow velocity used in the corrosion model is identified as the true water velocity.

Hydrogen sulfide is a flammable and poisonous gas. It occurs naturally in some groundwater. It is formed from decomposing underground deposits of organic matter such as decaying plant material. It is found in deep or shallow wells and also can enter surface water through springs, although it quickly escapes to the atmosphere. Hydrogen sulfide often is present in wells drilled in shale or sandstone, or near coal or peat deposits or oil fields. Hydrogen sulfide gas produces an offensive “rotten egg” or “sulfur water” odor and taste in water. In some cases, the odor may be noticeable only when the water is initially turned on or when hot water is run.
Heat forces the gas into the air, which may cause the odor to be especially offensive in a shower. Occasionally, a hot water heater is a source of hydrogen sulfide odor. The magnesium corrosion control rod present in many hot water heaters can chemically reduce naturally occurring sulfates to hydrogen sulfide. Hydrogen sulfide (H2S) occurs in approximately 40% of all wells. Wells with large amounts of H2S are usually labeled sour; however, wells with only 10 ppm or above can also be labeled sour. Partial pressures above 0.05 psi H2S are considered corrosive. The amount of H2S appears to increase as the well ages. H2S combines with water to form sulfuric acid (H2SO4), a strongly corrosive acid. Corrosion due to H2SO4 is often referred to as sour corrosion. Because hydrogen sulfide combines easily with water, damage to stock tanks below water levels can be severe.

Water with hydrogen sulfide alone does not cause disease. However, hydrogen sulfide forms a weak acid when dissolved in water. Therefore, it is a source of hydrogen ions and is corrosive. It can act as a catalyst in the absorption of atomic hydrogen in steel, promoting sulfide stress cracking (SSC) in high-strength steels. Polysulfides and sulfanes (free acid forms of polysulfides) can form when hydrogen sulfide reacts with elemental sulfur. The corrosion products are iron sulfides and hydrogen. Iron sulfide forms a scale at low temperatures and can act as a barrier to slow corrosion.

The absence of chloride salts strongly promotes this condition and the absence of oxygen is absolutely essential. At higher temperatures the scale is cathodic in relation to the casing and galvanic corrosion starts. The chloride forms a layer of iron chloride, which is acidic and prevents the formation of an FeS layer directly on the corroding steel, enabling the anodic reaction to continue. Hydrogen produced in the reaction may lead to hydrogen embrittlement. A nuisance associated with hydrogen sulfide includes its corrosiveness to metals such as iron, steel, copper, and brass. It can tarnish silverware and discolor copper and brass utensils.

The primary reason for applying internal coatings is to reduce friction, which enhances flow efficiency. Besides, the application of internal coatings can improve corrosion protection, precommissioning operations, and pigging operations. Increased efficiency is achieved through lowering the internal surface roughness since the pipe friction factor decreases with a decrease in surface roughness. In actual pipeline operation the improved flow efficiency will be observed as a reduction in pressure drop across the pipeline.

The presence of free water in the system is one cause of corrosion in an inner pipeline. An effective coating system will provide an effective barrier against corrosion attack. The required frequency of pigging is significantly reduced with a coated pipeline. The wear on pig disks is substantially reduced due to the pipe’s smoother surface. The choice of a coating is dictated by both environmental conditions and the service requirements of the line. The major generic types of coatings used for internal linings include epoxies, urethanes, and phenolics. 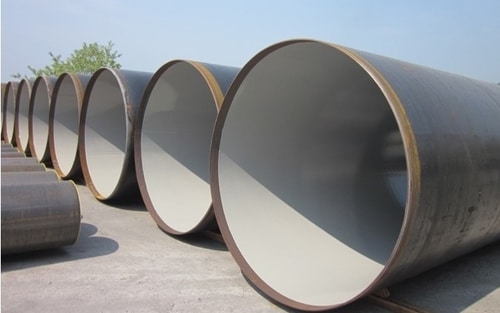 Increasing the electrical resistance of the metallic surface. Inhibitors can be generally classified as follows: 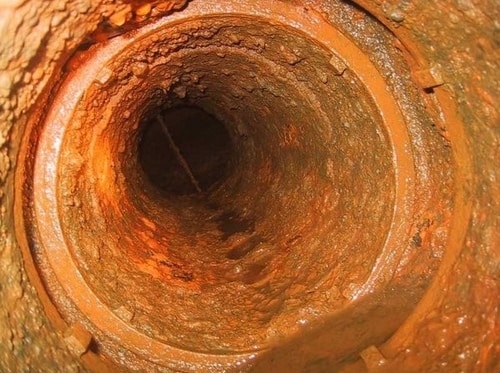 Figure 2. An Example of Internal Corrosion