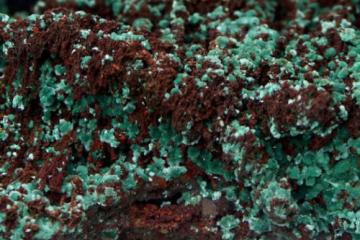 An Introduction to Corrosion

It would be helpful to understand a little about why corrosion occurs, with particular attention to the effects that you will find on projects around the world.

Corrosion is the disintegration of metal through an unintentional chemical or electro-chemical action, starting at its surface. The driving force that causes metals to corrode is a natural consequence of their temporary existence in metallic form. The energy that is absorbed and stored during the transformation into a metallic state from the original ore is gradually released through corrosion, returning the metal to its original compounds. 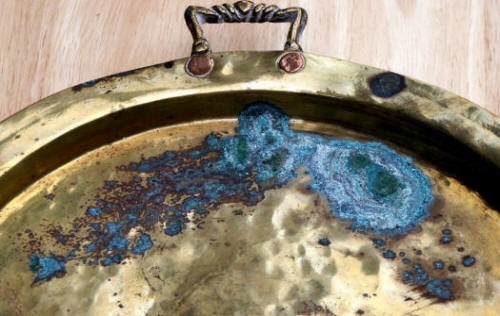 Figure 1. An Example of Metal Corrosion

Some words crop up all the time in descriptions of corrosion, here are some definitions to help understand them.

Electrolyte: This generally refers to the solution of a chemical compound, such as salt, that dissociates into electrically charged ions when dissolved in a liquid. The resulting electrolyte (or electrolytic) solution is an ionic conductor of electricity.

Atomic Structure – the Proton, Neutron and Electron: An atom has a dense central core (the nucleus) consisting of positively charged particles (protons) and uncharged particles (neutrons). Negatively charged particles (electrons) are scattered in a relatively large space around this nucleus and move about it in orbital patterns at extremely high speeds. It is the transfer of electrons during oxidization that lies at the heart of the corrosion process.

Oxidation, Anodes and the Galvanic Series:In a narrow sense, oxidation means the reaction of a substance with oxygen. In the case of iron, the reaction with oxygen causes it to be oxidized to rust, as electrons are transferred from the oxidizing iron to the oxygen. The transfer of the electrons and the formation of the iron oxide is the basic mechanism that produces loss of metal from the original iron. The process is referred to as an anodic reaction.

All metals exhibit a tendency to be oxidized, some much more easily than others. The relative strength of this tendency is recorded in the galvanic series. A metal’s position in the series is a key factor in galvanic corrosion effects, where different metals are in contact with one another. Environmental factors, such as oxygen and an electrolyte (usually water) also play a significant role in the speed of the corrosion process.

A corrosion cell works like a battery. Exposure of metal to an electrolyte completes a circuit, producing a current flowing from the anode to the cathode.
The surface of a metal, when exposed to an electrolyte, will have some sites that are more vulnerable to an anodic reaction, producing electrons that are consumed at other less vulnerable sites by cathodic reaction. These sites together make up the ‘corrosion cell’. 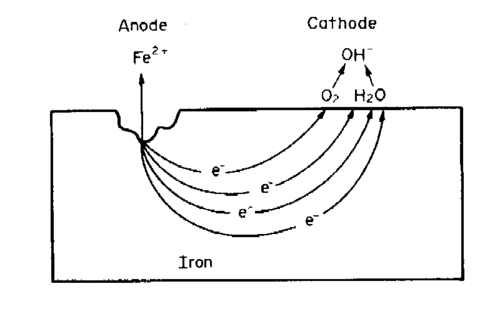 The anodes and the cathodes of the corrosion cell are not necessarily fixed in location – they can be adjacent or widely separated, depending on a number of different factors:

The process occurring at the anodic sites is the dissolution of metal as metallic ions in the electrolyte or the conversion of these ions to insoluble corrosion products such as rust. The flow of electrons between the corroding anodes and the non-corroding cathodes forms the corrosion current, producing the destructive process we see as corrosion.

Uniform Corrosion: Uniform corrosion occurs over the majority of the surface of a metal at a steady and predictable rate. Its predictability facilitates easy control, the most basic method being to make the material thick enough to function for the lifetime of the component. It is responsible for 30% of corrosion failures.

Localised Corrosion: Failures from localised corrosion are far less predictable than uniform corrosion and, because the failure may occur without warning, have consequences that are far more severe. Responsible for 70% of corrosion failures, they can occur after a surprisingly short period of use or exposure. There are a variety of mechanisms for localized corrosion.

Galvanic Corrosion: This can occur when two different metals are placed in contact with each other and is caused by the greater willingness of one to give up electrons than the other. Three special features of this mechanism need to operate for corrosion to occur:
1.The metals need to be in contact electrically
2.One metal needs to be significantly better at giving up electrons than the other
3.An additional path for ion and electron movement is necessary – an electrolyte.

Pitting Corrosion: This occurs when a coating breaks down. A small area of exposed metal gives up electrons easily and the reaction initiates tiny pits with localised chemistry supporting rapid attack. Pits can be crack initiators in stressed components or those with residual stresses resulting from forming operations. This can lead to stress corrosion cracking.

Crevice Corrosion: Crevice corrosion occurs when oxygen cannot penetrate a crevice exposed to an electrolyte and a differential aeration cell is set up. Corrosion occurs rapidly in the area with less oxygen as electrons flow to more oxygenated areas, causing severe material loss.

If we think of corrosion as a natural process which can be affected by a number off actors, we can better understand how, by interrupting this process, corrosion effects can be reduced or eliminated. In the three corrosion mechanisms describe above, just by eliminating the electrolyte, the effects of corrosion would, for all practical purposes, be eliminated. But, as can be seen in the case of pitting corrosion, localized coating failure can then lead to accelerated effects.

In most cases, a good quality coating on a simple surface, such as a steel pipeline, will provide corrosion protection by preventing exposure to oxygen and water-based electrolytic solutions. It is at the joints where the problems occur. Here, with multiple components, widely varying in size, and coating issues to do with assembly and complexity, exposure to corrosion mechanisms is far more likely, and far more difficult to eradicate.